For the 2018-2019 Team, I was never able to get around to finishing it last year but here is what last year’s team was going to be when all was said and done.

With Boatright, Holloway, and McQuaid (FINALLY) graduating, and Brazdeikis leaving early for the Draft even though he was basically a 30-year old Freshman at Michigan, there are a lot of slots for replacement players this season.  Heck, even the honorable mentions are gone.  Of course, I wish I could recycle Coach K every single season, but maybe he’ll just get to be the first two-time coach in a year or two.

For a guy that has been routinely surrounded by other hateable players (Andrew Rowsey, Theo John, Katin Reinhardt, etc.), Howard has finally risen to the top of the hateable Marquette players and taken his rightful spot as the Captain of this year’s squad.

One of the factors that will get you immediate consideration for any College Basketball All-Hate Team is one’s flopability.  Howard seems to have mastered the art of getting knocked to the ground by the slightest of touches or gusts of wind (inside an arena).  The compounding factor for all the flopping is that he’s a stellar free throw shooter, so he’ll almost always cash in on getting his bail out calls.

Here is a quick look at Howard’s stats against the Friars this season:

At first look, that’s pretty darn impressive.  If you look a bit deeper, those stats are a lot emptier than you might have initially suspected.  He shot 24-58 FG (41.4%) and averaged 4 turnovers to his 1.5 assists per game for a super stellar 1.5:4 assist to turnover ratio.  Those 58 shot attempts (24 per game) is an insane amount of shot attempts.  He took 47.5% of the shots for Marquette as a team in those two games…oh, and they lost both of them, no surprise. 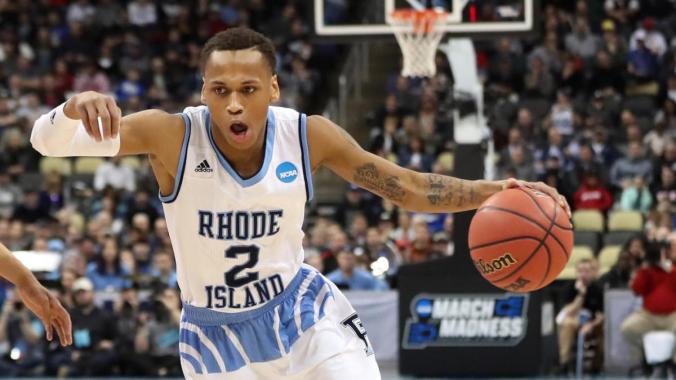 More than likely, there’s going to be a URI Ram on most of these All-Hate Teams.  At least half of the pictures I came across of Russell had him with the same expression on his face like he just saw a ghost.  I have to admit, I’ve never noticed it watching a live Rhode Island game, but he apparently does it all the freaking time.

Also, your name sounds like you 1920’s jazz musician. 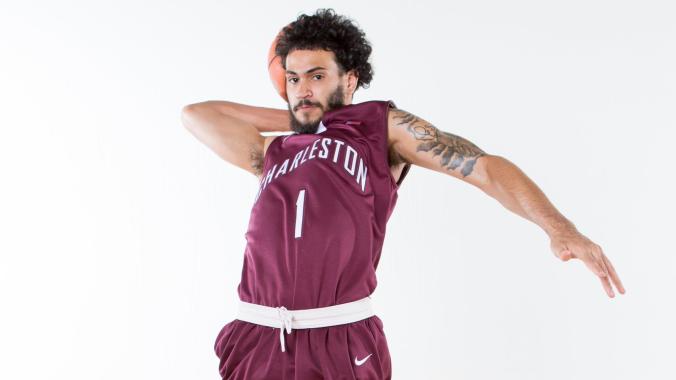 This might have something to do with the Friars hitting rock bottom during the Wooden Legacy Tournament that skyrocketed him up the ranks of the All-Hate Team.  His attitude on the floor is that he thinks his shit don’t stink.  The fact that not a single person on the Friars put him in check is something that I don’t think would’ve happened with this team at the end of the season.  He bullied them around and talked a ton of shit and nobody gave him a little hip check on a drive to the basket.  Also, this photo of him is a bit ridiculous.

A lax player turned basketball player at Northwestern.  He also looks like he’s about 40.  He’s more just annoying than anything else.  He was a hell of a lacrosse player though, so I guess that’s something for him.

I don’t know how you thought Mac McClung wasn’t going to be included on this team.  Georgetown went through a little bit of a weird season with players transferring or being kicked off the team early in the year but Mac will always be the one remaining hateable constant of the Hoyas.  I can already predict that he will be the first three-year member since Matt McQuaid of Michigan State, and even more so because I actually have to see him play all the time.

Just another reminder, people don’t hate nobodies.  McClung is a solid player that it’s fun to have a cordial dislike towards.  There’s not actual ill intent behind anything, it’s more of the fact that I like rooting for the team I like to beat him.

You may have left Cincinnati but don’t think I forgot about you just because you’re on the West Coast now Micky boy.