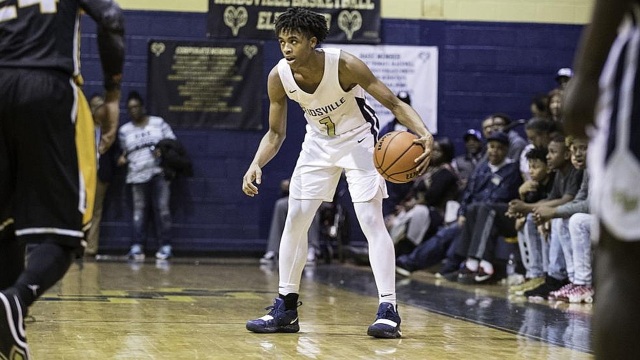 The Providence Friars’ recruiting success for the 2021 basketball class has gotten off to a rather rough go so far in 2020, but there are a few select High School basketball players that not only make sense for Providence as a College destination but who I would be psyched if that’s where they ended up next season.  Breon Pass is one of those guys.

The Friars and specifically Assistant Coach Jeff Battle have made some great headway on the recruiting trail in the Carolinas which makes me a little more confident in PC’s chances at potentially landing Pass as their first 2021 commit.  The fact that Breon included current Friar and North Carolina native Greg Gantt in his scholarship offer announcement is extra encouraging as well.

Blessed to receive an offer from Providence College!! #TTP pic.twitter.com/HMGHEDn6ds

Pass has been a stellar 2-sport athlete at Reidsville High School (all-state in both), excelling on both the  football field and basketball court.  Pass has only recently announced that he will be focusing solely on pursuing basketball at the collegiate level after receiving high level football offers from schools such as Virginia Tech, Texas Tech, Tennessee, North Carolina, Duke, Wake Forest, & NC State.

But then, when you are able to make a basketball play like this, who can blame you for choosing that sport over football…not to mention the potential injuries and long-term effects.

It’s pretty damn obvious to any person with a set of eyes that Breon Pass is an absolute monster of an athlete with insane leaping ability.

Since declaring that he will be only playing basketball at the next level, Pass’ stock and offers have begun to garner some speed.  So far, there have only been a handful of offers from high-major schools, including Georgia Tech, St. John’s, NC State, South Florida, & Rutgers.  Another advantage that Ed Cooley and the Friars have in this situation is that not only are they in early on the recruitment of Breon but a lot of other schools have already filled their empty scholarships for 2021.

Pass thrives off his competitiveness which is most likely byproduct (at least partly) of his excellent football career.  His mentality and cutthroat ability to compete is everything that Friartown loves and would embrace if he were to make his way to Rhode Island.  Here’s some highlights to get you more familiar with the surging 2021 point guard.