It is never easy to win on the road in the Big East.

The Friars were up by 14 with five and a half minutes left in the first half but the game was back-and-forth the entire second frame, eventually needing free extra basketball to decide it.

Nate Watson once again was dominate in the post, matching his career-high of 21 points, and showing why he is best offensive big man in the Big East.  Butler point guard Kamar Baldwin did literally everything he could to help the Bulldogs pull this win out at home but the lefty came up just short in the end.  Baldwin poured in 27 points during the game and actually led his team in rebounds with 6.  There’s not much more you can ask from your best player than that. 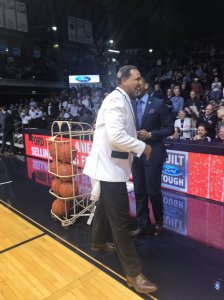 Providence by a million! https://t.co/IGk7N5BGFb

🎶 No one man should have all that power! 🎶#GoFriars pic.twitter.com/jf3zDQ3WqK

Get it & go, great connection from Ashton-Langford to a flying Reeves #pcbb #MakaiAshtonLangford #AJReeves #alleyoop pic.twitter.com/lqusEQiNH0

Forget the fact that this wasn’t a charge, how is the basket not good from MAL?? The shot is obviously out of his hands before any contact #pcbb pic.twitter.com/HjN5hsGQ7v

Up Next, the Friars try to even up the season series with Creighton.

One thought on “Game Recap: The Friars Get a Much Needed Win at Butler in OT, 73-67”