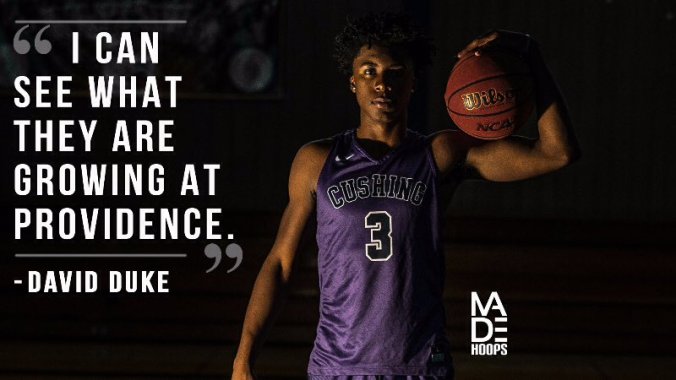 The Providence Friars top recruiting target for 2018, took to his personal twitter account (@Duuukkeee) on Friday night to announce his decision to commit to Providence College. Duke, a Providence native who lives just a couple of miles from campus, decided to choose PC over Buzz Williams’ Virginia Tech Hokies and potentially become a hometown legend, a la “Bad News” Marvin Barnes and Ernie DiGregorio.

The wait is over… pic.twitter.com/FFydeTbExl

Duke is currently listed around a Top-50 recruit in al of the major college basketball recruiting websites: 247Sports (48), ESPN (54), and Rivals (37).

With the addition of Duke, the Providence Friars 2018 recruiting class now has a total of 4 commitments with A.J. Reeves, Kris Monroe, and Jimmy Nichols Jr. That leaves one open scholarship for 2018 for PC.  Here is how the updated scholarship grid looks for the Friars with Duke’s commitment.

Per @DMountain87, there are currently 6 schools that had a Top-20 recruiting class in 2017 and presently have a Top-20 recruiting class in 2018: Duke, North Carolina, Arizona, Texas, LSU, and Providence.  Ed Cooley, man.  I can’t say enough great things about that guy.  He has completely changed the expectations at Providence College since he’s gotten here and has shown that he and his coaching staff can recruit right alongside the blue blood programs…and do so legally.

A bunch of former Friars came out to congratulate Duke on his commitment to the hometown Friars and spoke so highly of both Duke and the school.

Welcome To Friartown David Duke, This The Place Where You Can Be Anything You Want To Be!! Your Under A Great Coaching Staff And School!

@Duuukkeee let’s gooooooo broo!!!! Wish you the best and kill for the city #401kid

@Duuukkeee Welcome to the family Bro. PC gonna help you grow tremendously not just as a ball player but as a Man as well. FriarTown is the best anyways. 💯

Not to mention the current players and commits giving out props as well.

It’s an exciting time in Friartown!

😊😊 #pcbb we about to make made noise next year brother!!! Believe that. https://t.co/dqODTDHIFS

Duke marks the this Mass Rivals guard to commit to the Friars in the last two years.  Makai-Ashton Langford de-committed from UConn to come to PC, then A.J. Reeves signed on earlier this year, and Duke makes it three.  Hopefully the Friars can keep the connection going and get Akok Akok to come join his AAU teammate in Rhode Island come next year.

Duke talked about what went into making his decision with ABC6 and it speaks so highly of him as a person.

#WATCH: David Duke on staying home with PC: “I’m just doing what I love around the people who love me the most.” @ABC6 @Duuukkeee #Pcbb pic.twitter.com/c2GWqp2sa1

It’s an exciting time in Friartown. I can’t wait to watch this kid live, he has all the ability in the work and a drive to make himself the best. It’s going to be fun.