First off, let me just say that I’m going to take full blame for this loss.  Instead of watching the Friars game at home on TV, I went to the UConn/Temple game instead.  I was so flustered by not being able to watch the Friars that I actually forgot to change from my slippers to my sneakers before I left for the game, so I was wearing these guys the whole time. 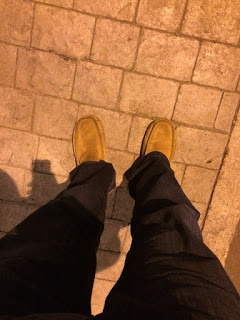 The 8th ranked Providence College Friars suffered their first loss of the Big East conference schedule and their first loss since November 29th against Michigan State.  It’s pretty good any time you can go over a month without a loss.  It hurts that they battled all the way back from a first half deficit and took the lead in the 2nd half, but it hurts even more so that it was home at The Dunk.

Marquette is a feisty team with a lot of length that bothered the Friars for much of the game.  When the Golden Eagles defense went to a zone, no Friar besides Kris Dunn was able to make them pay from deep.  Marquette is going to be a borderline NCAA tournament team come March and a win over a top ten team on the road is certainly going to look good on their resume.

Next Up, the Friars travel to Creighton to take on the Blue Jays on Tuesday January 12th.  The game is at 8:30 PM on FS1.

One thought on “Game Recap: Marquette Upsets the #8 Providence Friars 65-64 for PC’s 2nd Loss of the Year”