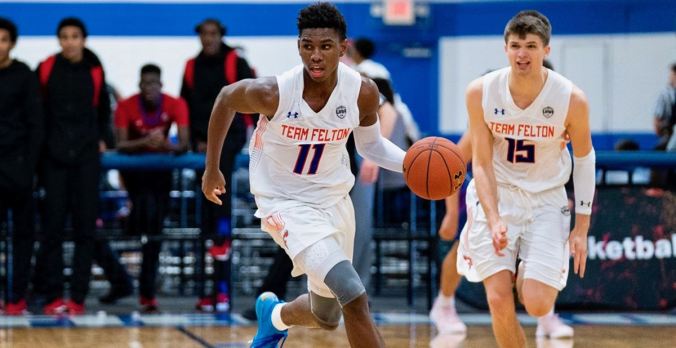 Greg Gantt, one of the most sought after wings in the 2019 recruiting class, has set an official visit to Providence College.  About a week after trimming his final list of schools down to 9, the 6’8” Forward will be heading up to the Friars campus on September 8th.

Along with Providence, Gantt has narrowed his schools down to Clemson, Georgia, Alabama, Florida, Vanderbilt, Pitt, Tennessee, & Texas.

Gantt has also said that he expects to visit both Georgia and Clemson in June and besides Providence, plans to visit Texas and Florida in the fall.

Gantt is one of, if not the, top recruiting target of the 2019 recruiting class for Ed Cooley and Providence College.  Cooley and his staff immediately recognized the talent and character that Gantt possessed and were one of the first schools to offer him, almost an entire year ago.

Here’s what Gantt had to say about the Friars (from Rivals.com) and his relationship with Ed Cooley:

“Coach (Ed) Cooley has seen what a lot of other schools didn’t see in me very early. Over the time that he has been recruiting me, he has been real with me. He has sometimes taken off his Providence hat and given me advice on my recruitment and what to look for. He wants me to make the right decision and he even said if I don’t pick his school, he is going to follow me because he loves me that much.”

If that doesn’t speak to who Ed Cooley is as a person and what he means to the Providence College culture, then I don’t know what does.  Much like Cooley, I have been enamored with Gantt’s athleticism, talent, and potential since the Friars offered him back in 2017.  And also like Cooley, even if Gantt were to choose another school to further his pursuits both in the classroom and on the basketball court, I’m going to be excited to see what he will be able to accomplish and will keep an eye on him wherever he thinks is best for him.

Greg Gantt perfectly exemplifies what it is to be a Friar and would fit in with this team, this staff, and this community seamlessly.  Friartown is waiting with open arms…