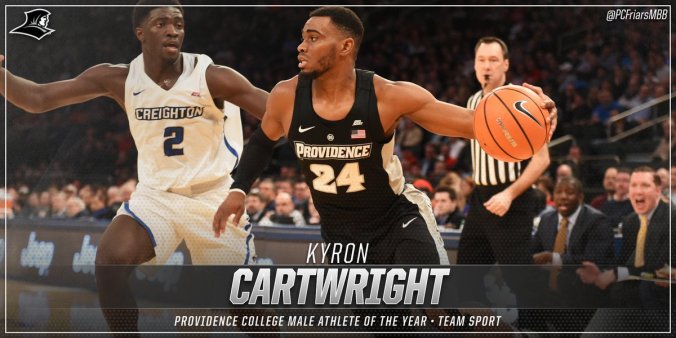 Kyron Cartwright was named the Team Sport Male Athlete of the Year at the Providence College end of the year All-Sports Gala.  Last year’s winner was the reigning MLS Rookie of the Year, Julian Gressel.

This year, Cartwright led the Providence Friars Men’s Basketball team to their 5th straight 20+ win season, as well as the 5th consecutive NCAA Tournament appearance, the most appearances in a row in team history.

Cartwright averaged 11.8 ppg, 5.8 apg (1st in Big East), 2.9 rpg, 1.0 spg, and finished third on the all-time assists list in Providence College history.  Cartwright also finished 38th all-time in scoring.  As Cartwright went, so did the team.  He was the main catalyst for the Friars the past two seasons and you could visibly tell the difference in how the team looked when he was off the court vs. when he was on it.

On a side note, check out the sweet ass sweater game out of Alpha at the gala.

Tommy Planek was also a speaker at the letter winner’s ceremony.

Tom Planek speaks at letter winner’s ceremony. One of the all-time great people in Friartown.#gofriars pic.twitter.com/FkPTlOMbys

Live from Alumni Hall; it’s the event before the event. We kick off the evening at our Letter Winners Ceremony w/ a few words from @PCBobDriscoll and men’s basketball player Tom Planek #gofriars pic.twitter.com/Z44JbCSrzN