This was basically a no-lose game for Providence.  It was a great opportunity for them to get another signature win for their NCAA resume, but if they lost, it’s really not a big deal because they were playing at #3 Xavier’s place and on their Senior Night.

Xavier never trailed in the game and capped off an emotional night for their stellar Senior class with their first ever Big East title, and first ever Non-Villanova Big East title for the conference.

Trevon Blueitt showed why he’s a potential All-American on his way to a game-high 23 points and moved himself into 2nd place all-time on the Xavier Men’s Basketball scoring list.

The Friars spread their scoring out with 5 players finishing in double-figures but 3 of those guys happened to score that off of the bench…not ideal when trying to beat a Top-5 team on the road.

Not sure I would’ve called it an “Alpha Duece” but it was a filthy left-handed hook to beat the shot clock #pcbb #AlphaDialli pic.twitter.com/l7FJg4mINN

Not sure I would’ve called it an “Alpha Duece” but it was a filthy left-handed hook to beat the shot clock #pcbb #AlphaDialli pic.twitter.com/l7FJg4mINN 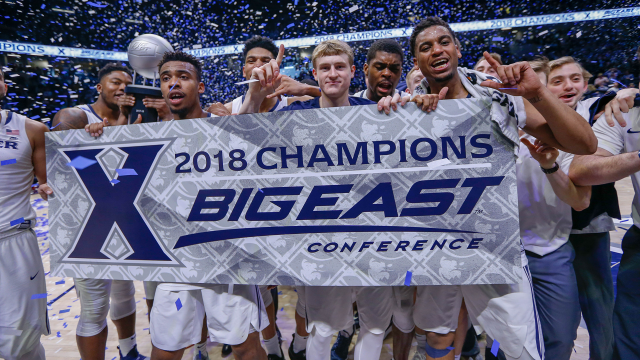 Next Up, the Friars return home for the Senior Night against St. John’s to finish out their Big East Regular Season.

One thought on “Game Recap: #3 Xavier Beats Providence 84-74 for their First Ever Big East Title”