Here’s what Andy had to say about the potential of the Friars this season.
1. Which team has the most potential to surprise you this season?
Andy Katz: Providence. The Friars went on a tremendous run last season to take the Big East tournament title. Villanova is the pick to win the Big East handily. But PC coach Ed Cooley loves his frontcourt and is optimistic about his youthful backcourt. If the guards can catch up quickly, the Friars could be a Top 25 team and NCAA tournament-bound by season’s end.
I agree with him 100%.  You figure, just by sheer percentages, that PC wouldn’t have so much bad luck with injuries, eligibility, and everything else for at least one year of Coach Ed Cooley’s tenure.  It’s just a matter of time before everything clicks right for one full season.
Unfortunately, red shirt Freshman Rodney Bullock already tore his ACL back in October, but I don’t get behind people who get suspended a season for sexual assault, so maybe there’s a little karma going on there.  Maybe that’s actually good luck for the Friars team.  Who knows?
Oh, and another side note, Bracketologist (what, you didn’t know they gave fake degrees for that?) Joe Lunardi knows what’s up this year too, picking PC as one of his “Last Four In” teams.  So sorry St. John’s & Xavier.  And yes, I know this means absolutely nothing since no actual games have even been played yet, but I’ll take what I can get. 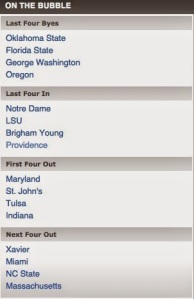