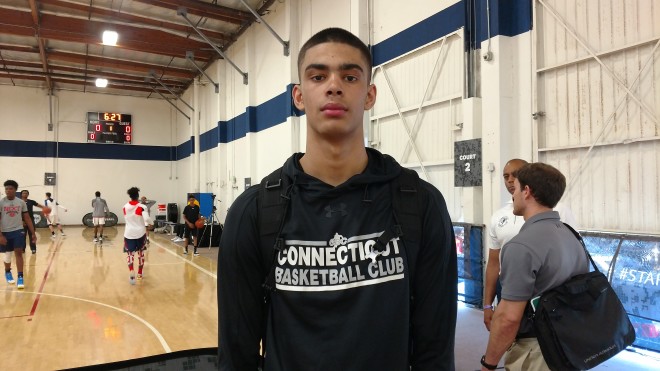 The Providence Friars have offered local Connecticut 4-Star Forward Jaiden DeLaire.  The 2019 class recruit plays his High School ball just down the road from me at Loomis Chaffee where my older brother actual played a post-graduate year of Football.

DeLaire is from Granby, CT and plays his AAU ball with Connecticut Basketball Club.  The lanky swing man holds a bunch of offers already, most noticeably from UConn, Stanford, USC, Rutgers, Kansas State, and URI.  The offers have mostly been local but some of the schools out West have taken notice of the rising Nutmegger as well.

The young baller stands at 6’8” and is still growing, weighing in at a svelte 210 pounds. His body type is much more lean than skinny and he still has time to fill that out more before college.  If he continues to grow, with the skills he has already developed as a ballhandler and passer, he’s going to be a tough guy to match up with.

Here’s some highlights of the High School Junior.

First impression from the limited clips out there for DeLaire is that he has great size.  Especially for his age, he has muscle on his frame.  With that muscle, he looks like he is an extremely physical type of player.  He likes contact and can finish through it.  I love players like that.  The ones that want to go to battle when they get on the court.  From what I can tell (once again, with limited film), he has range up to about 15 feet and a pretty shot for a guy with his size.  His footwork will catch up with his upper body with time as he grows his game into his new size.

He can be a versatile player on both ends and I have a feeling he won’t continue to be a Northeast secret for much longer.