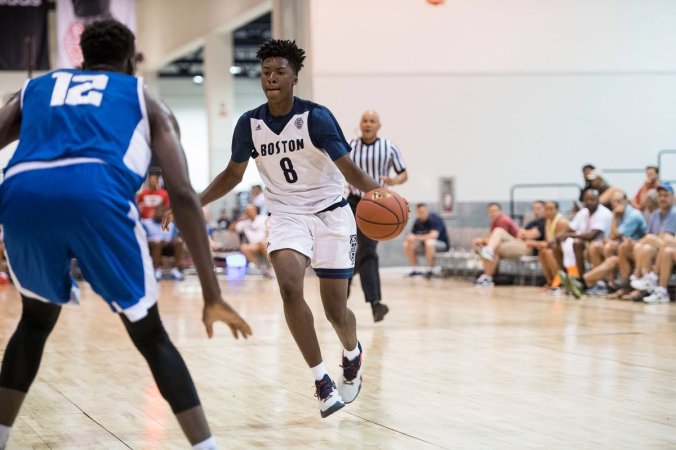 David Duke Jr. announced his Final 5 schools per his personal twitter account (@Duuukkeee) Monday night and included the Providence Friars in his list.  The other 4 schools that made the cut are Indiana, Villanova, Florida, and Virginia Tech.

I’m loving that Kansas isn’t listed in his top 5 as the continue to try and swoop in on these recruits late in the game.

Duke is a Providence native who plays for Cushing Academy for his High School ball and with recent PC Friar commit A.J. Reeves with Mass Rivals on the AAU circuit.  Duke is rated 48th overall in the 2018 class on 247Sports and 54th overall on ESPN’s Top 100.  The Crystal Ball predictions have Duke leaning towards PC so far, but those are never a 100% indicator of where someone will end up going.

Duke is a dynamic combo guard with outstanding athleticism and with tremendous upside to his game.  He has skyrocketed up the rankings and made a name for himself over the past year, cementing himself as a highly sough after player for any high level program.  Ed Cooley and the Friars, as always, were in on Duke before the rest of the College Basketball world came around and saw the light of his skills.  The Friars offered David Duke all the way back on May 25th of 2016.  They’ve been relentless in their recruiting efforts with Duke, making him a priority for multiple years now.  Hopefully that hard work pays off with a commitment from the Rhode Islander when all is said and done with his recruitment process.

Now, onto the highlights!

The one thing that you don’t really get to see in these highlights, per usual, is his defense. David Duke is one hell of a defender.  He has the ability to have a HUGE impact on both sides of the floor, much like Kris Dunn had during his time at Providence.