I threw together a quick breakdown of Providence’s non-conference games for much anticipated 2017-2018 men’s basketball season, in order of my excitement for each game.  So without further ado, let’s get into it.

There are 351 Division 1 basketball programs, so any time that your team is creeping up into the 300’s in any ranking system, that’s not good.  They’re basically this year’s edition of Grambling that we played last year.  Even if you win the game, it actually hurts your ranking because they’re so damn bad.

A little silver lining is that this is the last game of the out of conference schedule for the Friars and it is right before the Christmas break, so it’s basically an even longer extended Christmas break for the team to rest up before the conference schedule begins.  You almost don’t want that last team you play before the break to be just decent enough to beat you because sometimes the timing of this game can make it a trap game that players sometimes might have a hard time getting up for…plus, the student section will be back home for their Holiday break so the crowd dynamic will be different.

To be honest, I kind wish this schedule spot was used for Bryant.  I like taking down all three of the other DI basketball teams in the state in one year.

OK, I think I’ve written far too much on a matchup with freaking Sacred Heart.

I like that we get to take these nerds down a peg every year.  Providence smashed Brown by 40 last year and we get to put Jordan Spieth’s little brother Steven in a body bag…I’d say that’s a couple nice bonuses for the Ivy down the street.

I know nothing about this Rider team, other than that they are slightly better than Sacred Heart and Brown…so there’s some hard hitting analysis for you.

I’m holding out hope that Stony Brook can go on a little tear like Vermont did last year in their conference.  Stony Brook finished 2nd behind Vermont in the America East last year and returns everyone except for their leading scorer from last year’s squad.  Oh, and just a picture of a Stony Brook fan for the helluva it.

UMass had a rough year last year but should be able to bounce back a little bit this season in a pretty good Atlantic 10 conference.  The Friars beat the Minutemen at home last year, 75-69, in a game that was much closer than it should have been based on the kind of year that UMass had.  One guy that I am looking forward to seeing is that MONSTER Rashaan Holloway.  Here’s Ben Bentil from 2 years ago, absolutely abusing him.

From his Freshman year to his Sophomore year, Holloway has grown leaps and bounds, so I’m legitimately curious to see what steps he’s taken for this year.

(2K Classic)…hoping for Belmont here, so let’s just go with the most optimistic assumption and say its Belmont.

7 Seed in the NIT Tournament, lost in 2nd round to Georgia Tech

Although Belmont was the top seed in the OVC conference tournament, they fell to Jacksonville State in the semifinals.  Unfortunately for the Bruins of Belmont, even with their pretty impressive resume for a mid-major, they are pretty much only making the tournament if they win the OVC conference tourney.  I mean, they were 23-7 and the number 1 seed in the OVC tourney and were still only able to pull a 7 seed in the NIT.  On the flip side, a win over Belmont would be a nice little resume booster for the Friars.  Something that will look good when they put up Providence’s win-loss record vs. Top 50 (in the best case) or Top 100 (most likely) opponents.

Belmont will definitely be better than Boston College this upcoming season, but man do I hate Boston fucking College.  Somehow, even though they’ve STUNK these last two years, they’ve been able to have the Friars’ number in the head-to-head matchups.  Ed Cooley was a longtime assistant of Al Skinner at BC and still has ties to many people at the school and in the community…but I don’t, and I want to beat these fools by 30.  I want a dunk-a-thon.  I want some Tommy Planek highlights.  I want all of it.

Can’t hate on Super Fan though… 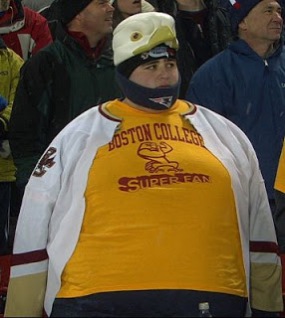 2 Seed in the NIT Tournament, lost in the 1st round to Akron

Houston has noticeably taken a step forward since Kelvin Sampson has taken the helm of the program.  They have recruited extremely well with Sampson leading the way but have yet to put things totally together for an NCAA Tournament run.  One reason is that their out of conference schedule has been so horrendous that even though it pads their overall record, none of the wins end up meaning anything at the end of the year.  Well, now you get a chance to take on Providence, and sorry, but you picked the wrong program to face off against.

PC will face Houston on 12/20 @MoheganSun . Time and tix info TBA. Quality opponent for the Friars as UH was 21-11 in 2017. #gofriars pic.twitter.com/I1iPJGYjZr

I’ll be going to this game at Mohegan Sun as I have been for the last couple of games that Providence has played there.

Coach Cooley has nicknamed Mohegan Sun as “Friartown South” and from attending a Friars basketball game there before, I think he might be onto something.  I went to the Florida State game as part of the Basketball Hall of Fame Tip-Off and it was basically all Friars fans.  I hope they continue to have “neutral” site games there each year.

Here’s a Cooley quote from the game against Florida State (80-54 Win) “I thought we fed off the crowd,” Cooley said. “I thought we were playing at the Dunkin’ Donuts Center (in Providence).”

Here are some pics from that game. 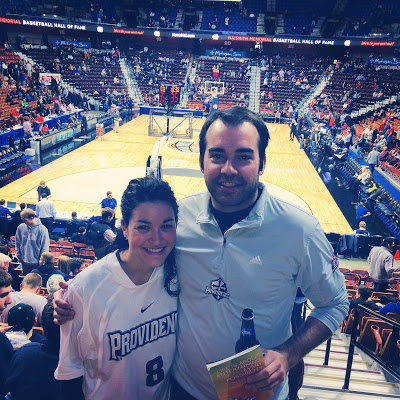 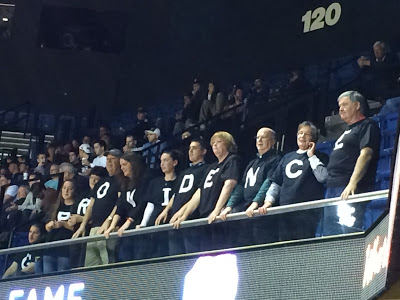 9 Seed in the NCAA Tournament (Virginia Tech), lost in the 1st round to Wisconsin

Virginia Tech should be ranked or close to ranked when they face off against the Friars at MSG in the 2K Classic.  Buzz Williams has done a great job in a short period of time with the Hokies.  I’m hoping the schedule works out so that we play Washington and VTech and miss out on St. Louis, because let’s be honest, St. Louis ain’t doing anything good basketball-wise.

The one thing I was hoping for was that the games would be on a Friday and Saturday rather than Thursday and Friday but if they play Virginia Tech on that Friday, then that’s the one I’m gong to try and get up there for.  MSG should be filled with PC fans since it’s both the only school in the Northeast and might be hard for fans of the other teams to get to during the week.

5 Seed in the NCAA Tournament, lost in the 1st round to Middle Tennessee State

An early season showdown of 2017 @marchmadness teams at The Dunk. #BIGEASThoops pic.twitter.com/9x0jiS82Dp

Minnesota is going to start the season ranked under PC Alumn and the 15-Second Man Rick’s son Richard Pitino, so this game being at the Dunk is both a homecoming for Richard and a great opportunity for the Friars.  This should be the highest ranked team that PC has a chance to play before the Big East conference slate of games.

Minnesota should finish the season in the top 2 or 3 teams in the Big Ten and is possibly the best matchup for the Gavitt Games that the Friars could have hoped for.  Even though the Gophers had a great season last year, finishing 24-10, they only managed to go 5-5 on the road and 2-2 in neutral site games.  Providence went 15-3 at home last year so those records do bode well for a potential PC win.

11 Seed in the NCAA Tournament, lost in the 2nd round to Oregon

Why URI number 1 you may ask?  One, because I fucking hate URI.  Two, we have owned them the last couple of years.  And three, this rivalry is at its best when both teams are good at the same time.  After their mini-run in the NCAA Tournament, URI is getting some respect in this year’s upcoming season…so I can’t wait for the Friars to crush their hopes again this season…this time at the Ryan Center at URI.

Prediction: Friars Win in a bloodbath.