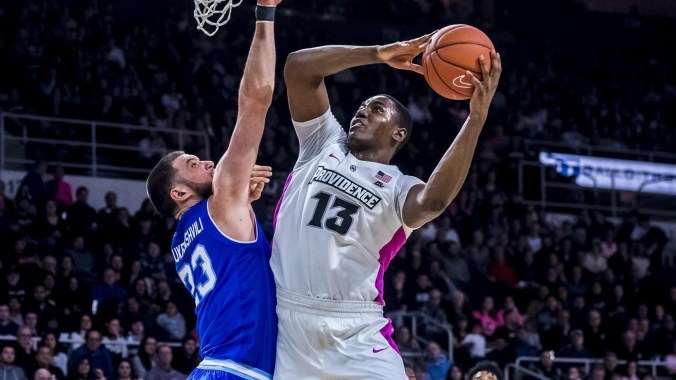 Almost as soon as I posted about Kalif Young being Close to an Agreement with Bornova Belediye in Turkey, he turns right around and officially signs with the Hamilton Honey Badgers in the Canadian Elite Basketball League (CEBL).

Excited to welcome 6’9 forward out of @PCFriarsmbb, Kalif Young (@youngkalif13), to our roster.

So on that note, Young returns home to his native Canada to officially begin his professional basketball career.  Young was born in Vaughan, Ontario, grew up in Mono, Ontario, and played his High School ball at Orangeville Prep, located in Orangeville, Ontario.  The Honey Badgers usually play their games in the FirstOntario Centre in Hamilton, Ontario, so it makes complete sense why Kalif would want to return close to home to pursue his basketball path.  In all likelihood, if Young’s family is still living in Ontario, they would be able to attend the majority, if not all, of his games.

The CEBL will become the first pro sports league in Canada to return to play since the COVID-19 pandemic started in March.  The league announced that it will resume play effective July 25 with the league’s seven teams will assembling in St. Catharines, Ontario for a 26-game competition that ends August 9 with the CEBL Championship game.

At least Kalif will continue to have a weird looking mascot…

Ricky Tarrant Jr. appears to be the stud for the Honey Badgers, leading the team last season with 19.3 ppg, 4.5 apg, and 1.5 spg.  Tarrant played his college ball at Tulane before finishing his collegiate career with a graduate year at Alabama.  The team is filled out with guys who played DI basketball in the states (Maine, Kansas State, UMass, Carleton, Samford, Niagara, and more) and the team finished an even .500 last year, going 10-10 and finishing 4th out of the 7 teams.

A little showtime from Alpha Diallo on the around the back pass to Young for the slam #pcbb #nova #alphadiallo #kalifyoung pic.twitter.com/qHR0xJMqJK

It figures that the only shots going in right now are behind the head no look put backs #pcbb #KalifYoung pic.twitter.com/979GBH0wy0

Big guys can dish too. Kalif with the clever pass on the backdoor cut from Reeves for the flush #pcbb #KalifYoung #AJReeves #TeamworkMakesTheDreamWork pic.twitter.com/FerNy0kpYo

Kalif with the strong finish through contact after a slick pass from Jackson #pcbb #KalifYoung #IsaiahJackson pic.twitter.com/klJLIlUabw