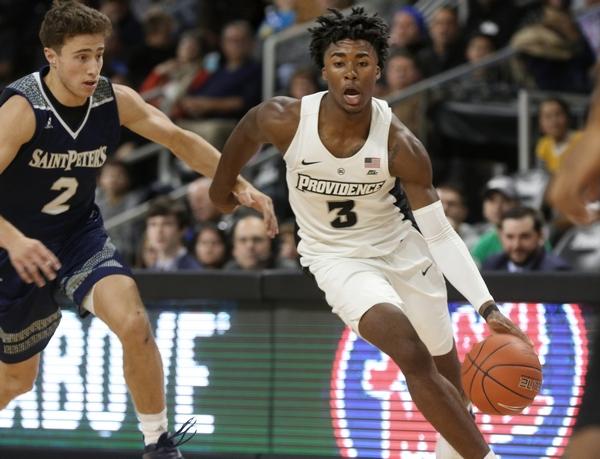 Even without A.J. Reeves (back), Greg Gantt (personal reasons), and Nate Watson (still), the Friars were able to handily beat the visiting St. Peter’s Peacocks at The Dunk over the weekend.  First off, who knew that St. Peter’s was the Peacocks?

Anyway, the first half was a lot prettier than the second, but the Providence win was never really in doubt.  After taking a 4-2 lead 1 minute and 9 seconds into the game, the Friars lead for the rest of the contest, leading by 21 going into the half.  During the 2nd half, St. Peter’s actually matched the Friars 26-26 while PC played some pretty sloppy basketball with the large lead.

David Duke led all scorers with 17 points and Alpha Diallo just missed out on his fourth straight double-double to start the season, finishing with 15 points and a game-high 9 rebounds.

It’s hard to win a college basketball game… Any time you can cross the line in success you should be the happiest people in the world,” Ed Cooley after PC’s win over St. Peter’s pic.twitter.com/n9OtDceuwS

👌THE BANK IS OPEN👌 pic.twitter.com/eFVR1zxPBh

St. Peter’s could use you in uniform today.

Huge shout-out to @maggs_mckenna for sinking that shot on Saturday. I recapped the magic on @TheRhodeShow this morning 🙂

Next Up, the Friars stay at The Dunk to take on first year D-I basketball program Merrimack at 7 PM on FSN.