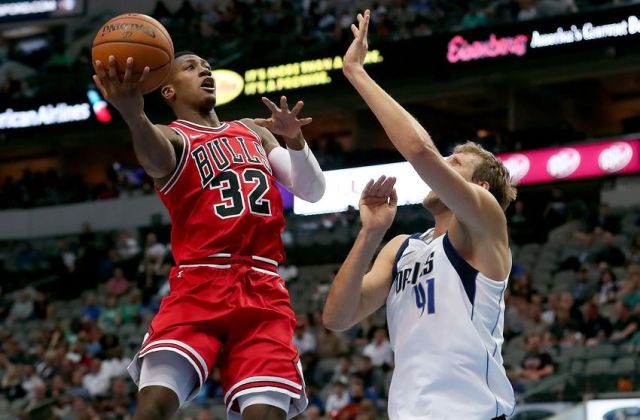 If you thought that it was just Friartown that was aware of Kris Dunn’s massive bounce back year with the Chicago Bulls this season, then I guess you were wrong.  Providence College Alum Kris Dunn was selected to play in the…get ready for this ’cause it’s a mouthful…2018 Mountain Dew Kickstart Rising Stars Game.

The game used to be the Freshmen vs. Sophomores game that was basically the best Rookies against the best 2nd-year players but, much like the All-Star game, they’re doing it a bit differently now.  The game is still composed of 1st and 2nd year players but it will be the USA vs. The World.  Doesn’t matter to me.  Any way that Kris Dunn can get the props that he deserves for his improvement and play this season is A-OK with me.

Here’s a look at the roster on Team USA.

A lot of really good players on the team but not much height if you ask me.  Let’s see how it stacks up against The World Team shall we?

Basically all the big guys went to The World Team and all the Guards and Small Forwards went to the USA Team.  Should be interesting to see how the game actually plays out.  If everyone wants to play free and no defense, then the guard-heavy squad looks promising but if the teams are playing to win, then it might be post-up city for The World.

Looking at Kris Dunn’s numbers from last year to this year is basically night and day.  Now, you would expect the usual stats to go up with an increase in minutes and opportunity but his shooting stats have all improved as well.

Kris still needs to get those percentages up across the board but he’s obviously put a ton of work in to get better since last year.

Dunn ranks 3rd in the entire NBA in steals per game, behind Paul George and Eric Bledsoe.  We always knew that his defense was there, but now his offense has started to develop alongside of it, given some patience, and the Baby Bulls now look like they have one of the best young cores in the league.  With Lauri Markkanen, Zach LaVine, Bobby Portis, Denzel Valentine, and Dunn all 24 years old or younger (Valentine is the only one who is 24), if they can flip Mirotic for some young talent or draft picks and get a lottery pick to add to the team for next year, the Bulls might have something here.

Best of Luck to Dunn in the Rising Stars Game and keep up the hard work young gun!