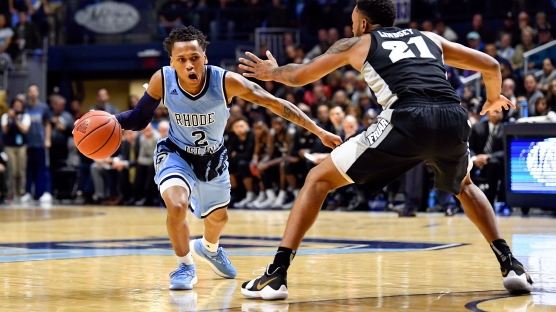 The Rhode Island Rams were about to pull out a win over the Providence Friars for the first time in 8 tries at home at the Ryan Center.  With the Friars missing Emmitt Holt for the season and the Rams without an injured E.C. Matthews, the matchup between the two Ocean State teams wasn’t exactly what everyone expected it would be before the season.

However, it was still a game that each team circled with anticipation when looking over their schedule and a chance to either squad to pick up an out of conference win that will look good on an NCAA resume at the end of the season.

Rams Freshman guard Fatts Russell recorded his 2nd straight 20-point game (of the bench mind you) and was a difference maker in a game that was a 3-point game with under 4 minutes to go in the 2nd half.  The Rams have one of the deepest backcourts in the nation and Russell looks like he’s going to be able to more than up to the task to replace the plethora of Senior guards the Rams will be losing after this season (Terrell, Garrett, & Robinson).

Alpha Diallo makes great use of a pump fake for the driving score.@PCFriarsmbb closing the gap. pic.twitter.com/wAFjkhERbW

.@PCFriarsmbb with the reminder to always hustle back in transition. pic.twitter.com/nS9bXnjs8Y

Some excitement from the opening tip.@PCFriarsmbb starts the game out with a smash! pic.twitter.com/R00TYqz9Tf

Next Up, the Friars keep it local against a visiting Brown team.

One thought on “Game Recap: PC Friars Lose for the First Time in 8 Years to URI”