Per Jon Rothstein and FanRagSports, the PC Friars will be heading back to Mohegan Sun to participate as one of the headliners of the 2018 Hall of Fame Classic.

The other headlining teams include Michigan, South Carolina, and George Washington.

The Friars head down to Mohegan Sun, otherwise known as Friartown South, this season on Wednesday December 20th to take on Houston (I’ll be there), so the majority of next year’s team will have some experience playing in Mohegan Sun Arena before the Hall of Fame Classic next year.

Prior to the 4 teams facing each other at Mohegan Sun, the campus site games will include the following teams: Boston College, LaSalle, Northwestern, Texas Tech, Maine, Sacred Heart, St. Peter’s, & South Alabama.

Providence last played in the Hall of Fame Classic in 2014 where they took down Florida State and Notre Dame on their way to the tournament championship.  The Notre Dame game was especially exciting and included a special 38-point performance from LeDontae Henton. 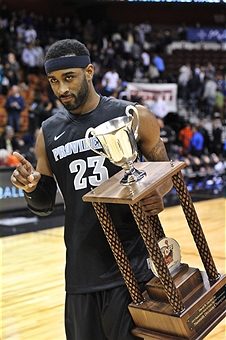 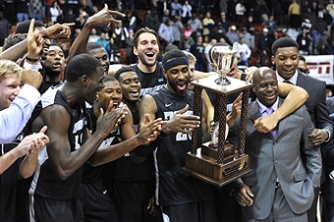 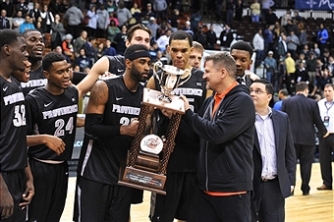 You can check out all 38 of “Buckets” points in this video courtesy of Kevin Farrahar of Frairbasketball.com.

It will definitely be interesting to see new PC commit Jimmy Nichols Jr. take on his home state South Carolina Gamecocks, a team that he had planned to officially visit but decided to announce his commitment to Providence before even officially visiting the school. Yes, it would have been more interesting if the game was being played in South Carolina for him, but it is still kind of cool nonetheless. I can’t wait to see if Frank Martin is as intimidating and scary in person as he is on TV.

Kansas State head coach Frank Martin yells at an official during a time out in the second half of an NCAA college basketball game against Iowa State Saturday, Feb. 25, 2012, in Manhattan, Kan. Iowa State won 65-61. (AP Photo/Ed Zurga)

Actually, I’ll just try not to make eye contact with him if that’s cool.