You can always count on a DePaul game to get you back on track.  Even though Providence was getting pretty much handled down low by the Blue Demons in the first half, they were able to complete turn around the big man battle in the second half, actually outscoring DePaul in the paint when all was said and done.
The Friars were once again led by Bryce Cotton with a game-high 28 points as he had his way with the every guard that DePaul could throw at him.  Cotton, 9 of 15 from the floor, showed again why, along side Creighton’s Doug McDermott, he is the class of the Big East and a shoe-in to repeat as a first team selection this year.  Unfortunately for Cotton, I’m not sure there’s a possibility of him beating McDermott for player of the conference.  As of right now, McDermott is probably the front runner for player of the year in the nation after his 39 point effort against St. John’s that included a game-winning three at the buzzer.
It’s still crazy to me when I look at the box score, that PC has three guys who played the entire 40 minutes of the game.  Cotton, Henton, and Fortune were all on the court for every second of PC’s victory and Harris was close behind with 36 minutes played (which may have been 40 if not for some foul trouble).  Henton dropped in 19 points, while Harris was fantastically efficient on his way to 18 points.  Batts crashed the boards well all night per usual and was able to come down with a game-high 9 rebounds.
With the win, the Friars are now in sole possession of 3rd place in the Big East.  As a side note, I don’t know what’s going on with UMass these days but they better figure it out soon.  They’ve lost 3 of their last 4 games and are likely going to slide out of the top 25 when the next rankings come out.  PC would definitely benefit from UMass popping back into the top 25 by the end of the year so that OT loss looks better when the selection committee meets in March. 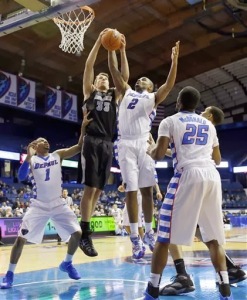 Next Up: The Friars come back home to take on St. John’s at the Dunk on Tuesday.