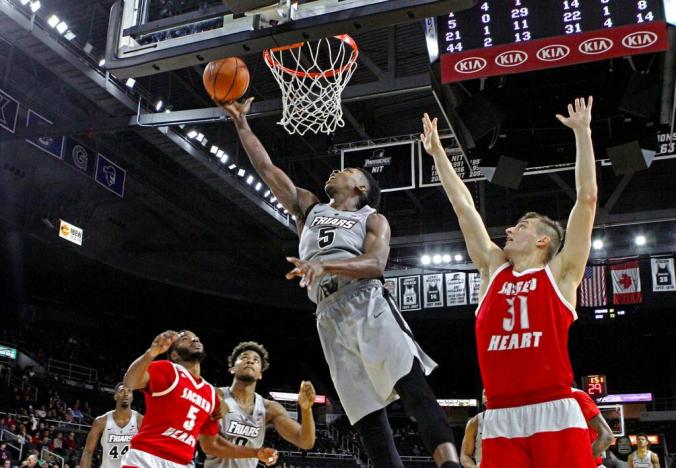 The Providence Friars finished up their out of conference schedule with a convincing win over visiting Sacred Heart and will enter Big East Conference play with a 9-4 record.  PC took it to Sacred Heart early, scoring 49 first half points, taking a 17-point lead into the half and never trailing in the game.

The first half may have been the most complete half that the Friars have played all season and gives Friartown a little more optimism heading into Big East play.  The main thing for Providence is for them to get healthy as the Friars were without Kyron Cartwright, Maliek White, and Alpha Diallo in this game.

The Friars start off their Big East slate at St. John’s, at Creighton, home against Marquette, and home against Xavier, so they have no time to start slow or short-handed.  The Friars will need their depth at guard when they visit St. John’s, a team spearheaded by two playmaking guards in Shamorie Ponds and Marcus LoVett.

The Friars were led by Rodney Bullock (31), Isaiah Jackson (17), and Jalen Lindsey (13) en route to their win, although they didn’t quite cover the spread.

Straight out of a pick up game with the passing #pcbb pic.twitter.com/sEDQW609QD

Next Up, the Friars open up Big East play against St. John’s at Carnesseca Arena (I wish it was at MSG so that Friartown could show up in droves) on Thursday, December 28th at 7:00 PM.